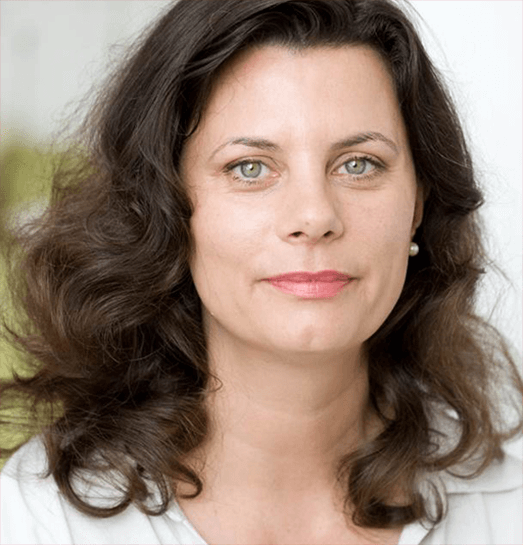 The coronavirus has plunged our world into an unprecedented crisis. It is the first global crisis in the networking era. Even before COVID-19 the times we live in had been marked by constant change at an ever-increasing tempo. The complexity of our lives had reached a new dimension thanks to digitalisation, globalisation and networking. The global outbreak of COVID-19 has accelerated this change at a breathtaking rate and has radically intensified the crisis. As a publicist, strategy consultant and crisis coach I am an inspiring and solution-orientated sparring partner for companies and executives who want to emerge stronger from this crisis. My book, “Die Kraft liegt in mir – Wie wir Krisen sinnvoll nutzen können” [“The strength is within us: How we can put crises to good use”] is more relevant than ever today. 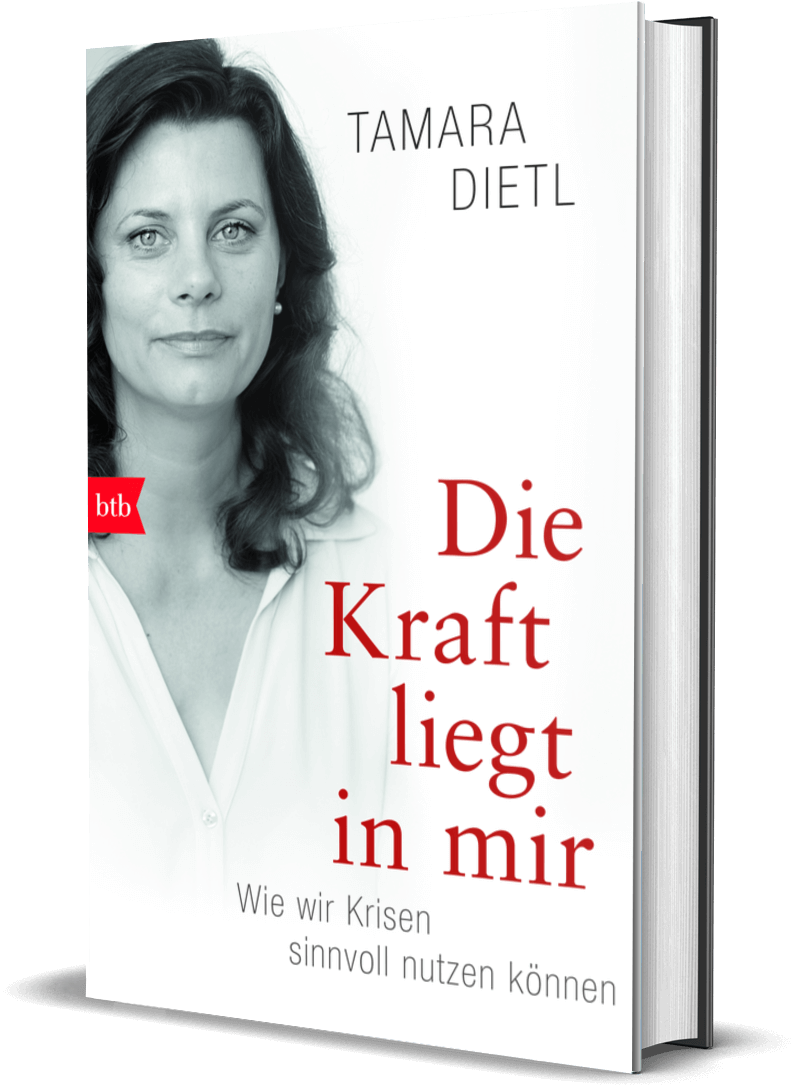 Max Frisch once said that “Crises are productive situations once we have removed the aftertaste of disaster.” This is incredibly difficult in view of the coronavirus crisis. But Max Frisch is still right. In order for us to use crises productively and master them powerfully it is important to understand what a crisis actually is. Because it is much more than a problem that seems insurmountable.

A crisis is an exceptional situation, an interruption of continuity. It is a burdensome, temporary process of change whose course and consequences are unknown. A crisis is marked by the trusted coping strategies we have had for solving problems and that have always helped us no longer being available. It is always possible for everyone, every community and every society to develop new coping strategies and discover new resources. Coping strategies and resources that can make us strong. Of course this is not possible in the first phase of a crisis, which is characterised by us being in a state of shock and not wanting to acknowledge the crisis. The important thing to do in this phase is overcome this state of shock and slowly start to accept the crisis. Because it is there whether we want it to be or not. When we integrate it into our lives the most reasonable course of action is definitely to make the best of it. Because we are in this world to give meaning to our lives - even in times of crisis, or perhaps especially at such times.
The claim that life has something to offer us, the claim that we are guaranteed a safe, healthy and happy life - this claim is, in reality, very skewed indeed. The perspective is exactly the opposite. Insecurity is the normal state of affairs. Always. Not only during a crisis. But during phases that are (relatively) stable for a longer period of time, we imagine that we are safe and that our nice lives will continue like this for ever. But in truth that is an illusion. Viktor Frankl, in accordance with whose Theory of Meaning I completed a further qualification to be a crisis coach, said: “It is life itself that asks people questions. People do not ask questions; they are the ones being asked questions by life and who must answer life, and indeed answer to life.” The deeply satisfying aspect of this form of self-responsibility towards life is the self-determination which goes along with it and which is of fundamental importance especially during crises. Because it is this self-determination that makes one free. Frankl also defined the term “freedom” so that it can really help us in times of crisis. Because: “The freedom of people is not, of course, a freedom from conditions”, says Frankl. “It is not freedom from anything at all, but a freedom to do something: to take a position regarding all these conditions.”

In this freedom “to do something” lies the key to dealing with crises in a sensible manner. And that includes the current coronavirus crisis. How do we want to face this crisis - “we” both as individuals and as a community? There are three ways of emerging from a crisis: firstly, the restoration of the status quo. Secondly, a negative change that leads to an undesirable development. And thirdly, a positive change characterised by a sensible development. In all my crises I have always decided on this third possibility: to find the strength within myself that will help me to grow during the crisis. The attitude required and what emotional and mental tools we need to acquire to achieve this are what my book is about. In it, I describe what mechanisms we need in order to discover the chance and the meaning within the crisis: only in this way can we turn it into a productive situation and thereby remove the aftertaste of disaster. 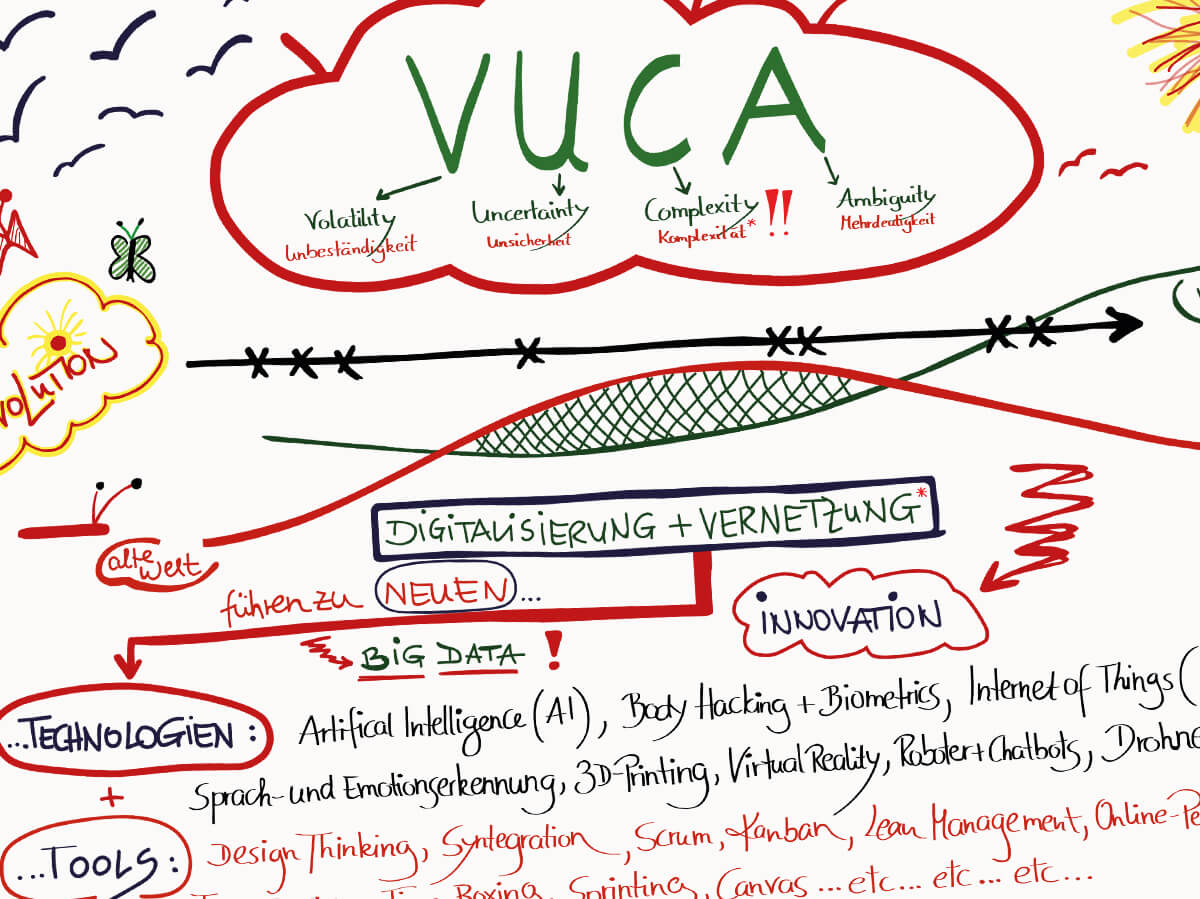 ...the description of the state of our world which has come about with the era of digitalisation, networking and globalisation and which is now being exacerbated considerably by the coronavirus crisis. VUCA is an acronym for Volatility, Uncertainty, Complexity und Ambiguity. In order to present a better picture of our VUCA world I have put the contexts in a diagram...

The story of my “VUCA” poster begins on a rainy September day in 2017. To be more precise, it was at a moment in which I was at my wit's end linguistically. It was after an hours-long consultation meeting with the CEO of a major company. As in nearly all consultations and coaching sessions of recent years, this was also about “transformation”, “digitalisation”, “agile management“, “change”, “new work” and all the other latest buzzwords. In short, it was about “what was going on out there” in our world. And about what that means for my client’s company. We had actually made pretty good progress at the meeting and he left my office in a fairly cheerful mood. I, however, was cheerless rather than cheerful; I was not really satisfied with myself. As so often recently. And the reason was that I could not rid myself of the unmistakable feeling that although he had understood a lot, he was only able to sense rather than recognise the big picture. And so I had once again failed to communicate it in words. And it was no comfort to me either to console myself with the thought that it is, of course, difficult to explain something really “new” using “old language”. This relatively obvious realisation may be interesting for me as an author, but for my client it was relatively irrelevant. Because as a consultant it is my job, damn it, to help my customers find solutions to their problems.

When I started my consulting activities ten years ago, problem-solving still looked (relatively) easy. Because the path from the problem to its solution was still (relatively) linear. When the customer’s problem was on the table and the analysis was successful, it would be possible to achieve a reasonable solution with a linear “if-then” solution in the best case. And this is exactly the way in which things have fundamentally changed in recent years. The greatest challenge of our time for nearly all of my customers is digitalisation and along with it the question of new, innovative and frequently disruptive business models. More and more frequently, “Chief Digital Officers” (CDOs) or innovation strategists are being employed to deal with this. This is definitely right and reasonable, but it also harbours the risk of the theme of digitalisation being understood, or misunderstood, as a separate unit.

Because the really great challenge is not so much the technology of digitalisation in itself, but rather its consequence – and that is NETWORKING! The technical possibilities of networking everything with everyone at any time. This endless, networked exchange of data and information – this is the actual, major challenge of our times. And this is not simply in terms of technology, but in literally EVERY respect: social, economic, academic, political, cultural, ethical, legal, philosophical, ecological, demographic, medical and physical, but also social, psychic, emotional and mental… It is a fundamental, holistic and evolutionary upheaval of existing conditions at high speed and in XXXL format that is really shaking the ground, which we had previously assumed to be so stable, beneath our feet. It is the Volatility we sense, the Uncertainty that grows out of it, the Complexity that seems to overwhelm us and the Ambiguity that shakes our view of the world. It is the VUCA world that we live in. And this is why consulting has also changed fundamentally. In my view, consulting is no longer a linear path from the problem to the solution. Indeed, it is now the monitoring of highly dynamic processes of small and large systems in a world whose complexity is increasing exponentially at a dizzying speed - and above all the discovery that everything is connected to everything else.

And so on that rainy September day, after my client had gone, I followed an intuitive impulse in order to present what I had had such difficulty in expressing linguistically in a different way. I covered one of my 2.5 square metre pin board with a sheet of white paper and started to draw: the big picture at a glance. You can see the result here. And if you look more closely you will see that it is not so much a picture as the illustration of a system. Of an open system, because it is, of course, never finished and I will constantly be adding to it. And of course I could not do it completely free of language. Words and terms used in the right context can, after all, explain something that is new and above all is more than the sum of its parts.

The sheet is now hanging in my office like a large mind map and anyone who wants to can locate themselves, their company or their situation on it in a superordinated context. My consulting sessions have not become less complex because of this, but they have become a little easier. Because, unlike in a text, it is possible to portray “what is going on out there” visually. One of the few people who recognised this more than 20 years ago is the management mastermind Professor Fredmund Malik. I worked for him for a long time and one of his central thoughts has been a leitmotiv of my work ever since. Actually, it has become the leitmotiv of my life: “The Great Transformation from the Old World to the New World will fundamentally change everything: what we humans do, how we do it and why we do it. Ultimately it will also change who we are.“

„Frage an Tamara Dietl“ in DONNA

Please address all requests regarding publications, readings or lectures to my agent Anoukh Foerg: www.anoukhfoerg.com

since 2008
Strategic consultant for transformation processes,
business coach for executives, author and journalist

Trust is the basis of my work. Confidentiality is therefore my top priority. For this reason I coordinate targeted references in advance and provide them to you at a personal meeting.